Dessislava Ivancheva and Biliana Petrova, former district mayor and deputy mayor in the Bulgarian capital Sofia are currently in jail sentenced to 6 and 5 years of jail, respectively.

Watch an excerpt from the arrest that was broadcasted live on Bulgarian National TVs and lasted more than 10 hours:

Mayor Ivancheva and her Deputy won the Municipal Elections promising to preserve the green areas between existing residential buildings formerly assigned as new construction sites. They have stayed true to their political beliefs, and have pursued a sustainable built environment development policy.

By doing so, the Mayor and her Deputy have consistently opposed unsustainable and constitutionally illegal activities relating to new-build construction, including the falsification of documents. Perhaps, due to this, at times they have been drawn into policy conflict with certain representatives of Bulgaria’s ruling party.

By participating actively in the civil protests and thanks to the emerging civil discontent of the 9-year rule of the mayor from Boyko Borisov’s party (Boyko Borisov is the current prime minister of Bulgaria), she managed to win the citizens’ trust, while actively participating in a petition for a moratorium on new constructions in the panel-block district that was overdeveloped even in the socialist era. Ivancheva is the only non-partisan mayor of a district in Sofia.

Ivancheva closely followed a policy against overbuilding, and repeatedly entered into open controversy with representatives of the ruling party in Bulgaria. Ivancheva and her team, including the deputy mayor Bilyana Petrova, appointed by her, meticulously followed the fight with illegal activities related to new constructions. They have repeatedly sent notices about falsified documents about construction works. They were about to disclose at a press conference details of violations of a newly adopted law, related to annihilation of the Green system of Sofia city. That press conference was scheduled for the day after their arrest and the two detainees failed to realize it.

On April 17, 2018, Ms Dessislava Ivancheva and Ms Bilyana Petrova, the Mayor and Deputy Mayor of Mladost Municipal District, were arrested at a busy central intersection, in Sofia, Bulgaria.

They were handcuffed and held on the street in conditions humiliating to their human dignity and harmful to their health: Their hands were cuffed behind them, they were physically prevented from speaking, prevented from calling for legal representation, prevented from drinking water, prevented from using the toilet. In the service car they travelled with, the police found 56,000 euro – marked banknotes, and later they were accused of requesting and taking bribes.

Despite the tremendous contradictions, inaccuracies, and lack of evidence in the accusations, the detention act was accompanied with extreme brutality and performed in a degrading manner. The human dignity of the two detainees was disrespected through abnormal procedural investigative practices and blatant disregard for the laws. The two arrested were held handcuffed for many hours at the busy intersection without access to lawyers or medical assistance, as well as being forbidden access to drinking water, or even the toilet. Hours after the initial detention, Ms. Petrova was taken to the toilet while handcuffed, and a masked female employee went into the toilet cabin alongside with the door open.

Ms. Ivancheva and Ms. Petrova requested lawyers at the time of the arrest. Instead, masked employees forcefully covered their mouths with a hand to stop them from shouting. This act, apart from a rude violation of their rights under the laws and the Constitution of the Republic of Bulgaria, also constitutes physical violence committed in public.

During the first hearing in the building of the Specialized Criminal Court, which was on the measure of detention, Mayor Ivancheva and Deputy Mayor Petrova were kept in a glass and soundproof armoured cell designed for the most dangerous criminals and terrorists, so that they could not talk to the media. At a court hearing on 07.06.2018, the two women were held with their hands cuffed behind them, such that they would be prevented to hold sheets of paper with handwritten notes to show to the media. The notes that Ivancheva and Petrova showed to the media in the courtroom contained parts of the special intelligence means, which rise serious doubts about a conspiracy and an offense committed by an organized criminal group against them.

The Prosecutor’s Office carried out a noisy campaign to discredit the detainees and instill in society the presumption of guilt, contrary to Art. 6, para. 2 of the European Convention for the Protection of Human Rights and Fundamental Freedoms, according to which “Everyone charged with a criminal offence shall be presumed innocent until proved guilty according to law”. However, a study by Gallup International sociological agency was presented in the news broadcast on the national television bTV on 27 April, in which a significantly higher percentage (44%) of the respondents said the arrest of the two was contrived (see the picture attachment taken from the bTV broadcast). The torture and public humiliation of the politically independent mayors continues while in the detention center, too. On August 1, Dessislava Ivancheva was sent to a hospital for treatment of a pituitary tumor. She was led away as if she is a one of the worst criminals in Bulgaria, being chained on the legs, as an example to all who dare to confront the interests of the ruling ones (watch the entire video taken by her former PR Petar Kardzhilov). Bilyana Petrova was treated in the same way. In the social networks, this act reflected in ironic comparisons showing how the Ministry of Interior treats some of the most prominent persons from the criminal world in the most corrupt and poor country in the EU, on one hand, and Ivancheva, on the other. 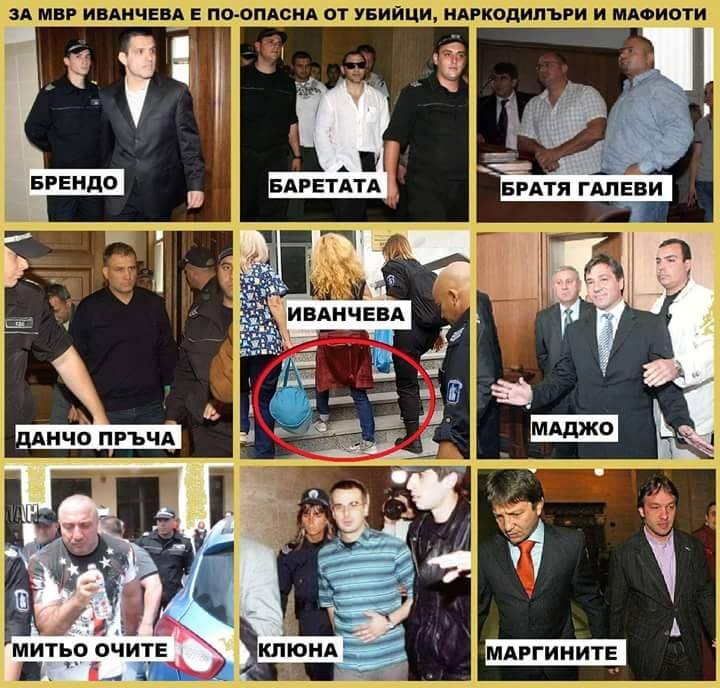 On September 16, 2018 the mayors gave their first interview ever since they had been arrested, and the interview was broadcasted on one of the major Bulgarian televisions. In the broadcast they described the inhuman conditions and harassment they had been subjected to in order to be forced to admit being guilty.

Live video of how Dessislava Ivancheva was taken to jail in front of her 1 year old baby. She had 15-20 minutes to prepare her luggage for the jail.

The video reached about 1M people on Facebook and have over 20.6K reactions, comments and shares. Dessislava and Biliana are now the most famous prisoners in Bulgaria with very high support by the population.

This website uses cookies to improve your experience while you navigate through the website. Out of these, the cookies that are categorized as necessary are stored on your browser as they are essential for the working of basic functionalities of the website. We also use third-party cookies that help us analyze and understand how you use this website. These cookies will be stored in your browser only with your consent. You also have the option to opt-out of these cookies. But opting out of some of these cookies may affect your browsing experience.
Necessary Always Enabled

Any cookies that may not be particularly necessary for the website to function and is used specifically to collect user personal data via analytics, ads, other embedded contents are termed as non-necessary cookies. It is mandatory to procure user consent prior to running these cookies on your website.